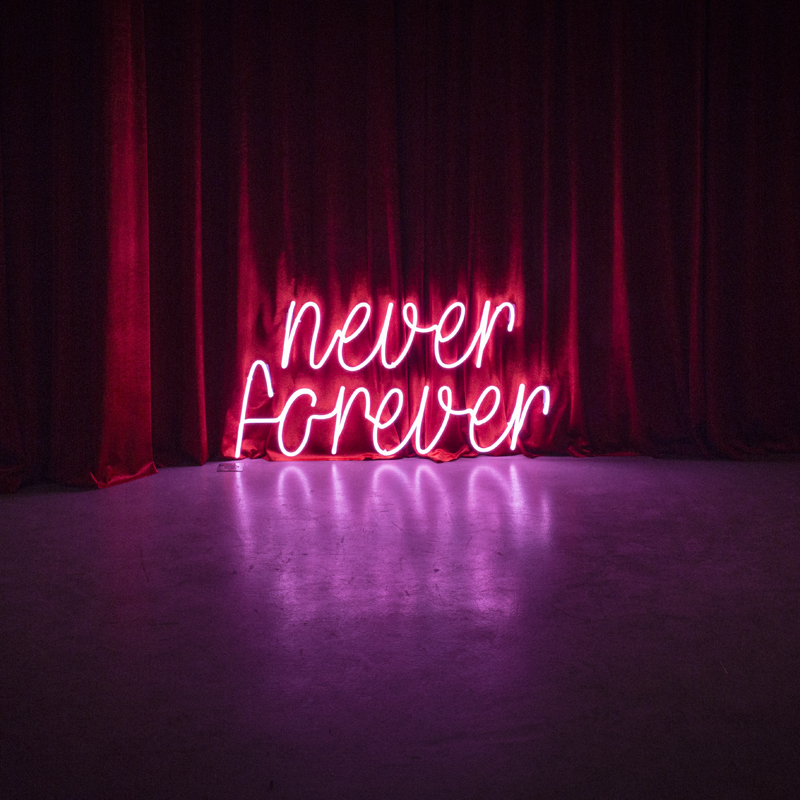 “The one-artist show of Iskra Blagoeva in ICA-Sofia Gallery is woven out of contradictions. The artist is relaying on visual impact while at the same time composing her objects as obvious or hidden references, hints and quotations waiting to be deciphered.
The used light and color are symptomatic. They are reorganizing the very space of the gallery. The allover glamour of the environment is invaded by text. The fishing pole is marked as a S&M accessory; the musical “merry-go-round” is small and suspended from the ceiling like those toys over a baby’s cradle. It shines and glistens in a fury of pseudo-Swarovski utensils from the beauty markets. The rose neon sign “Never Forever” insistently introduces a hint of whining for the unfulfilled eternal love, happiness, beauty, youth…
The overly beautified atmosphere which the artist has created is triggering the sensation of pretense, and the feeling of unrest and insecurity. Passion and frustration, emptiness and satiation, the feminine and the “lady’s” characteristics are contesting each other as a commentary on the gender identity. The woman envisioned in the show is a product – of gossip and the laic opinion, of media generalizations and statistical manipulation, of misunderstanding and lack of respect, of her own insecurity.”

The work has four components:

01: “Dizziness is not Fear” is a children’s music toy, like the once put above the baby’s cot. It plays the popular song “Love me tender”, attracting the viewers with the shining, artificial, obviously cheep and kitschy jewelry.

02: “Emma, Don’t Jump in Neva!”
A fishing rod, turned into a strange whip. The work is dedicated to Emma Goldman, who is known as a rebel, an anarchist, an ardent proponent of birth control and free speech, a feminist, a lecturer and a writer. When Emma was a young girl she witnessed a peasant being whipped with a knout  in the street. This event traumatized her and contributed to her lifelong distaste for violent authority. In 1885 Goldman wanted to join her sister, who made plans to move to New York, but their father refused to allow it. Desperate, Goldman threatened to throw herself into the Neva River if she could not go.

03: A red curtain framing the whole space. The title “Problema YYY” refers to the PMS (premenstrual syndrome) which in 90’s has been declared as a disease mostly due to the policy of the drug companies developing a new market. The piece is based on the research of Julia T. Wood in her book Gendered Media: The Influence of Media on Views of Gender. She describes the problem as follows – “Facts aside, the myth has cough on, carrying in its wake women and men who now perceive normal monthly changes as abnormal and as making women unfit for positions of leadership and authority. Another consequence of defining PMS as a serious problem most women suffer is that it leads to labeling women in general as deviant and unreliable, an image that fortifies long-held biases against women.”