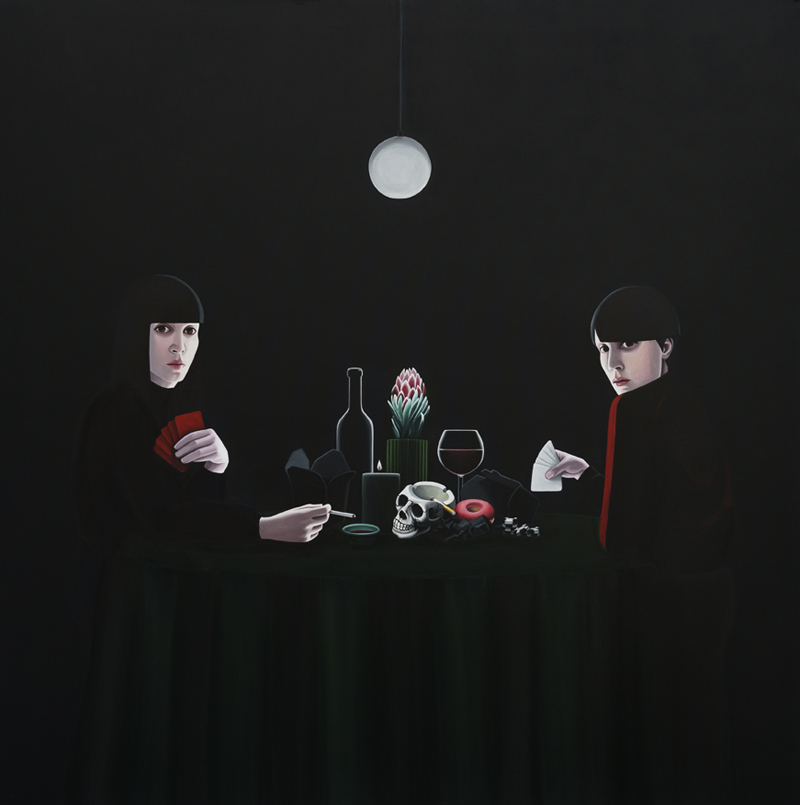 Lilith and Eve Gamble over Adam
from the series “Black Paintings of Cheerful Events”
2020, acrylic on canvas, 120x120cm

With the painting Lilith and Eve Gamble over Adam, Iskra Blagoeva continues to develop her series of works Black Paintings of Cheerful Events. All of them are related with the mythological narratives or popular (sacral) images which the artist transforms, always depicting a certain extreme states. Going back to the original biblical story of Adam and Eve, the artist chose to present a situation that is seemingly beyond the Fall. We see a time and a space which is not only far from Eden, but seems to fit in another dimension – a black hole in which the matter gains a different shape and character. The heavenly is cultivated, multiplied, depreciated and finally cold-bloodedly consumed. The opened fast food boxes, the flower in an undersized pot, the ash tray, the perfect donut that rather seems a piece of porcelainware – an artefact that has long lost its function to give pleasure, the wine and the bleached skull make up a still life beyond the natural. In this psychedelic world, the light bulb hanging like gallows replaces the sun; there is neither a way out, nor divine light. The consumed Heaven is the decor of the main act, in which the first human, the man – Adam – is gambled over at cards by the lookalikes Lilith and Eve, in whose form the artist portrays herself. The ultimate state of decadence is reached, which cannot “bear” fruit and “resurrect” the natural. In Iskra Blagoeva’s works, this state of overwhelming finale is a metaphor for the failure of the patriarchal order and the societal conditions and structures created by it, which comprise the foundation of the Western Christian culture. Through the extreme denial – the disgust, cruelty, coldness, and arrogant cynicism towards the sacral, the artist seeks a new image, a new beginning, which puts the woman in another role and gives her the strength to be capable not only of creation, but also of destruction like a vengeful Goddess.